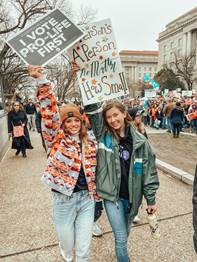 A Word from the Chairman

The sanctity of life is a key plank of the Republican Party Platform and we have a HUGE Champion in President Trump.  Not only does he consistently reinforce his pro-life position but his public support for faith based initiatives has been tremendous!

On Friday, January 24, he welcomed several hundred thousand to Washington D.C. including my daughter Claire and a group of students and teachers from her high school.  He became the first sitting President to speak at the Annual March for Life Rally in the forty seven years of the event.   Like the sign says, “A Person’s A Person no Matter How Small”  and we Republicans are winning the argument with the younger generations on this one (just ask CNN).   The Republican platform has stayed a consistent “pro-life” while the Democratic position has transitioned from “safe, legal and rare” to a radical “shout your abortion” presumably at any time without any restrictions.

I Vote Pro-Life First and its just one of a zillion reasons why I support our Republican candidates including President Trump.